To sign up for this Newsletter and/or to scope back issues, click HERE.
Hey Gang -
Welcome back for another edition. Always a pleasure to have you guys aboard.
This is the first weekend I’ve been home in awhile, as touring season rages on. Our show this weekend in Illinois got rescheduled for mid-Oct, so I’m enjoying a rare weekend home in LA. Will be back on the road by next weekend, though.
Let’s jump right in this week!

How I Quit Smoking
I just celebrated 43 years of no smoking earlier this week on August 8th, so I figured I would give you guys the quick (and rather unusual) background on how this unlikely landmark came to be.
In my extensive blog about my sobriety journey (catch the full story HERE), I had mentioned that, when I first started attending a rehab program at 13, the counselor urged my parents to allow me to smoke in front of them as sort of an olive-branch move that he could leverage against me agreeing to a 30-day commitment to the program. My folks were not so keen on this idea, but if it meant there might be a better chance of me letting go of the weed and alcohol, they were agreeable. Sure enough, it proved to be an effective “goodwill” tactic for me to try the program in earnest, and I would never touch weed, alcohol, or any other kind of drug from that day forward (9-14-76).
As for smoking, well, let’s just say that for every 20 kids in the program that gave up getting stoned, 19 of us smoked like a plastic factory. And I would continue my pack-and-a-half-a-day habit, right along with both of my parents, each of whom smoked about as much. (Can you imagine what our 2000 sq. ft. home in Houston must’ve fucking smelled like back then? God bless the seventies…) 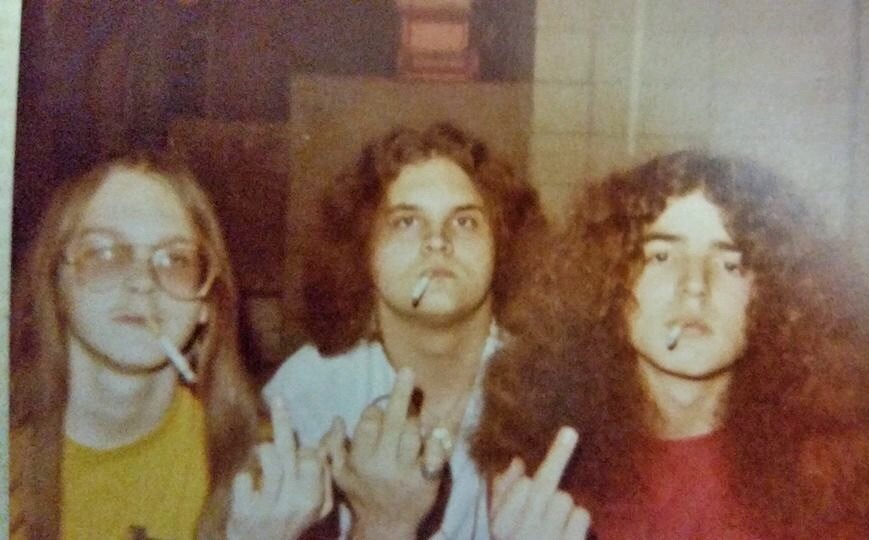 Me with my first real band, all guys from the program—
Bryan Hearn (left) and Gary Pinkstaff (center)—
and all of us smokers, of course!
Over the next several years, my dad and I would arbitrarily enter into a half-hearted attempt to quit together… with specific stakes that we would outline in a one-page, handwritten contract: If I started up again first, I would have to pay him some sizable chunk of change—like, say, $1000—by my 18th birthday which, presumably, would require some kind of monthly installment program from the various odd jobs I would sustain, especially through the summer. But, if he started up first, he would have to buy me a brand new, Pearl Octaplus-style kit with a full array of concert toms. We would shake on it and then have a final smoke together. But then, in a desperate moment of weakness over the next several days, one of us would propose that we renege on the deal, tear up the contract, and return to our pack-and-a-half-a day habit. There was never much resistance offered up from the one who did NOT suggest the cancellation, and cigarettes would be lit up within five minutes.
Finally, at 16, it was time to take the plunge on that big-ass Pearl kit.  None of us had that kind of money lying around, so my dad agreed to finance the kit with a two-year deal via a bank loan… with the understanding that I would be responsible for making the payment every month. I agreed and got a job at a local car wash. Six weeks later, I was the proud owner of a beautiful 13-piece Pearl kit with a chrome finish. It was slammin’! 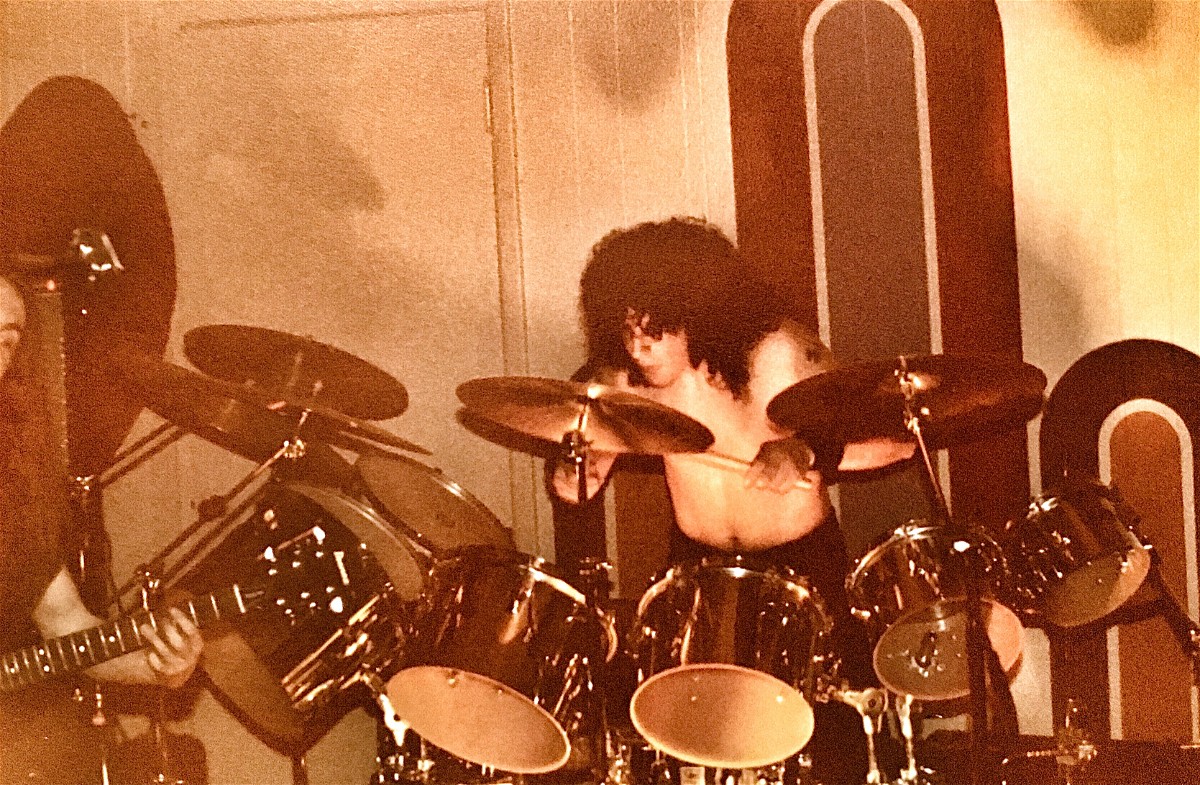 I'm sure I have a better pic of this kit somewhere,
but you get the vibe!
Life was grand… except for one issue: the car wash job required an “unreasonable” amount of time: several three-hour shifts after school during the week, plus eight to ten-hour shifts on both Saturday and Sunday. This new job was seriously cutting into my valuable practice time! What the fuck was the point of having this kick-ass kit if I was stuck at work all the time, I reasoned?
And so, three or four months into our new arrangement, I approached my dad with a slight variation on our normal quit-smoking agreement:
“For every month that I don’t smoke a cigarette, will you agree to pick up that month’s payment?”
Incredibly, he agreed! I was stunned.
“But what if I start smoking again after the drums are paid off?” I argued (perhaps against my own case!).
“Well,” he said, “if that will save a few years of your life, it’s worth it to me.”
(How cool was this guy, huh?) 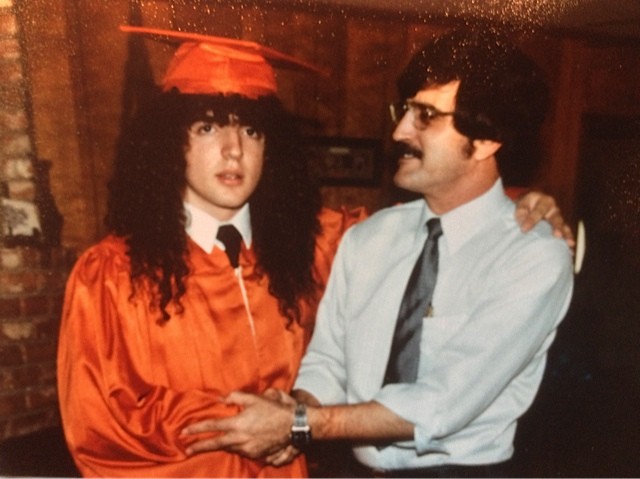 The old man and me nearly two years later at my graduation.
And so, we had a deal, and on August 7th at 11:55 PM, I would have my last cigarette. I can still recall, with pinpoint clarity, the particulars of that last smoke. It was late on a Tuesday night, a couple hours after a PDAP meeting (the 12-step program I sobered up in). We were at Panjo’s Pizza, and I was just about to sit down with a fellow group member named Sam, who was upset about something. As we made our way back to an unoccupied table to talk, I had to interrupt for a minute:
“Sam, do you realize this is my last cigarette ever right now?” I asked, before taking another puff. "This one! Right here!” I emphasized, as smoke poured out of my mouth. Sam was a little distracted at that moment with whatever he was going through, plus he probably didn’t believe me. Hell, I don’t know if I even believed me. But sure enough: that would be my last cigarette ever.
I wish I could tell you that I was able to quit from pure discipline without such an overt material carrot like a big, expensive drum set dangling in front of me… but I don’t know if I could’ve at that time. It’s a vicious fucking addiction… certainly one of the hardest things I’ve ever given up.
But the truth is, in retrospect, it was actually my love for practicing and wanting to devote more time to my craft—which meant everything to me—that proved to be the greatest impetus, not necessarily the drum set itself (since I already owned it!). This is probably pretty telling in terms of what was at the core of what drove me back then. I do remember the 11th grade, which I would jump into within a month of quitting cigarettes, as being a significant year where I upped my practicing game quite a bit.
PS. Fortunately, both parents would follow suit soon after. First, my mom, who started running (and would later run marathons) and then, eventually, my dad. And before long, that Autumn Forest house was a non-smoker's paradise!
_______________
Your Best, X 2!  What Would You Do? 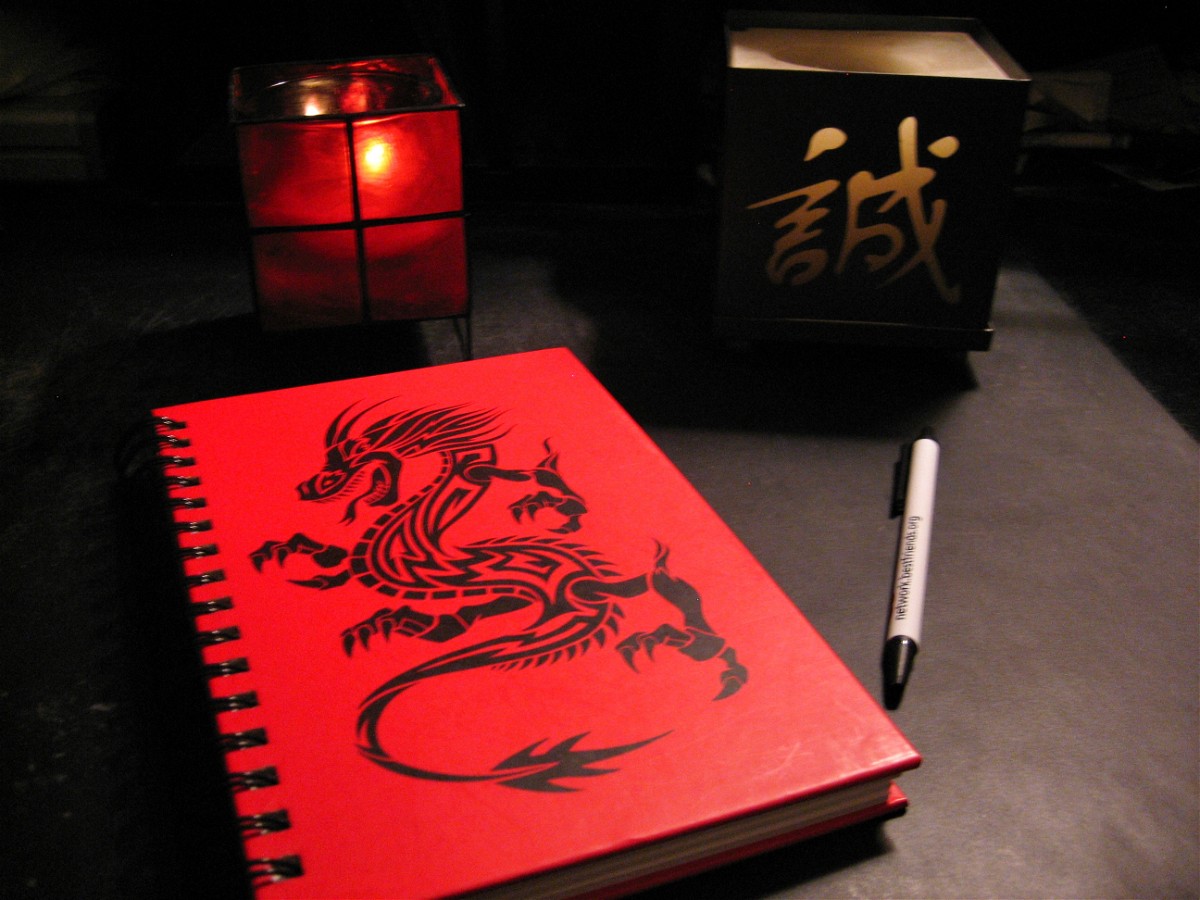 Here’s another journal exercise for you. This one examines how exactly you may or not be pursuing your life purpose, based on how well you think you are (or could potentially be) at pursuing it. Here’s the deal:
You are given the chance to take a magic pill that will essentially DOUBLE a physical and/or mental skill set you’ve already developed to some degree. (Can’t be something brand new… there has to already be something there to double!)
Which skill would it be? (Something you are currently doing for a living or something else?)
How might your life change (or not) as a result of the newly acquired mega-boost in skills?
With no magic pill scenario available, what might be the single most important attribute of your skill set that you could realistically “double” that would have the biggest impact?
If you feel compelled, try jotting down a few thoughts in response here. An epiphany (possibly) awaits!
_______________
And finally, I'll leave you guys with a bit of a “feel good” road story...
Redemption In Sturgis!
Sturgis, South Dakota hosts the world’s largest motorcycle rally every summer (simply referred to as “Sturgis”) over multiple days in August. It’s known for its wide array of top-flight acts who play concerts around town at several different venues, the biggest and baddest of which is an outdoor venue called The Buffalo Chip, or simply “the Chip,” for short. It’s always an awesome show at this place, with literally thousands upon thousands of hell-raising, rock & roll-loving bikers on hand who really appreciate a good show.
The last time I played the Chip with Lita Ford was in 2018, opening up for Kid Rock. As usual, the place was packed, the vibe in the air was thick, and we were all jacked-up to jam for these folks. We knew Lita had been having a rare struggle with her speaking voice that day, but all was going okay… until the third song. Her voice was completely gone. Fuck.
And so… having never had this happen before—especially mid-show—we just kind of haphazardly jammed our way through the set, essentially playing “instrumental” versions of the tunes. Obviously, the crowd knew what was up and, thankfully, they remained in polite support of our efforts as we struggled our way through the set. Yes, we pulled it off… but it was lame, and we all felt extremely unsettled about the show. Double-fuck. 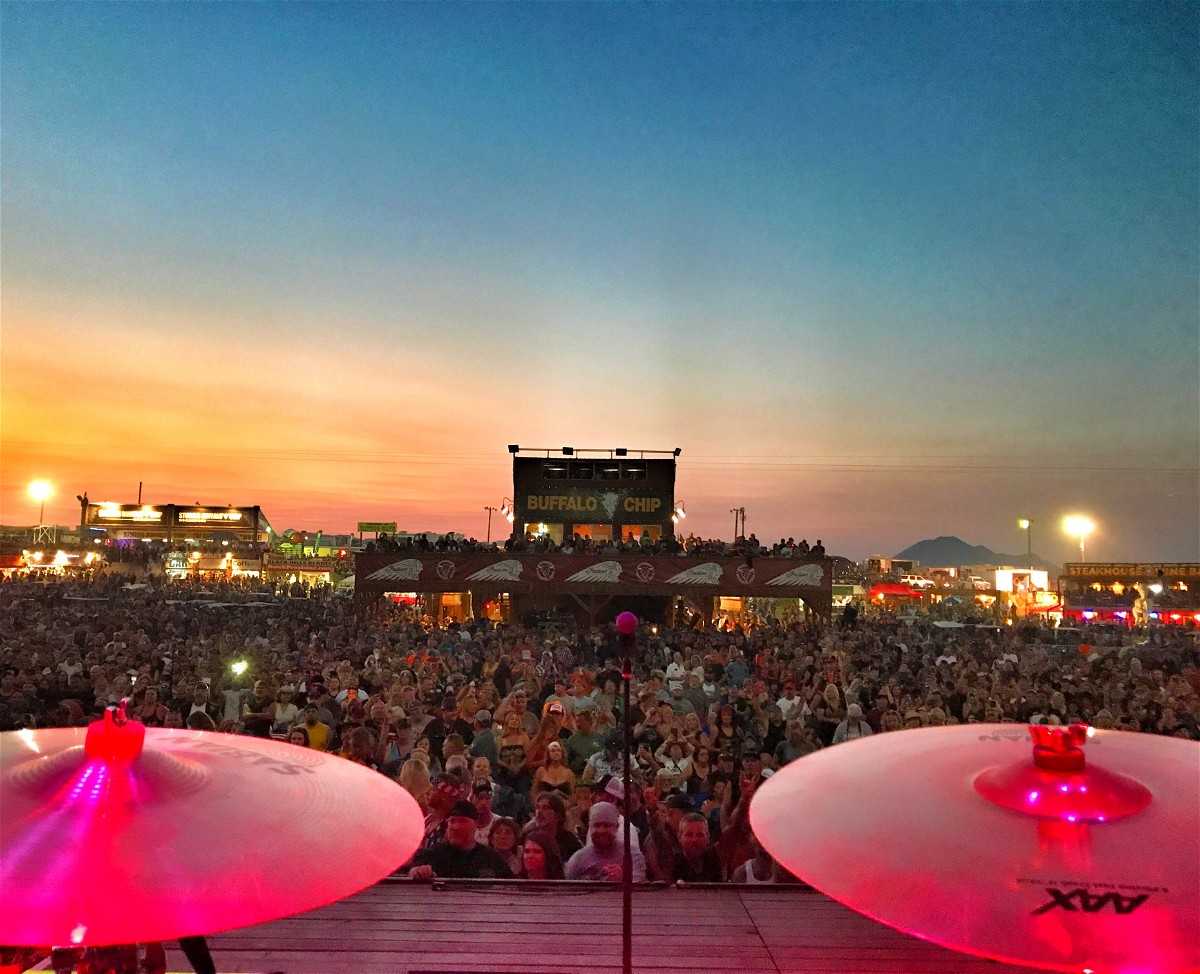 Taken pre-show on that fateful 2018 night…
We did manage to play a smaller venue at Sturgis last year (“Full Throttle”) as kind of a last-minute booking, and the show did go well… but it just wasn’t the same. We were still reeling over the 2018 debacle. Would Sturgis ever invite us back to the Chip?
The answer was “yes:" to open for Rob Zombie last Monday! Of course, if you caught the Newsletter issue from two weeks ago, you know that about eight days prior to that show, we had a rare instant replay of Lita losing her voice—the only other time before or since that Sturgis show—so we were all freakin’ for a minute: “Not again!”
But there was no cause for concern. As mentioned in that issue, Patrick Kennison covered vocals for the one show where Lita couldn’t sing, then her voice got stronger and stronger over the course of the next eight days on the road, right up until showtime last Monday in Sturgis. We had a kick-ass hit and, we’re happy to report, at last—redemption in Sturgis was ours! 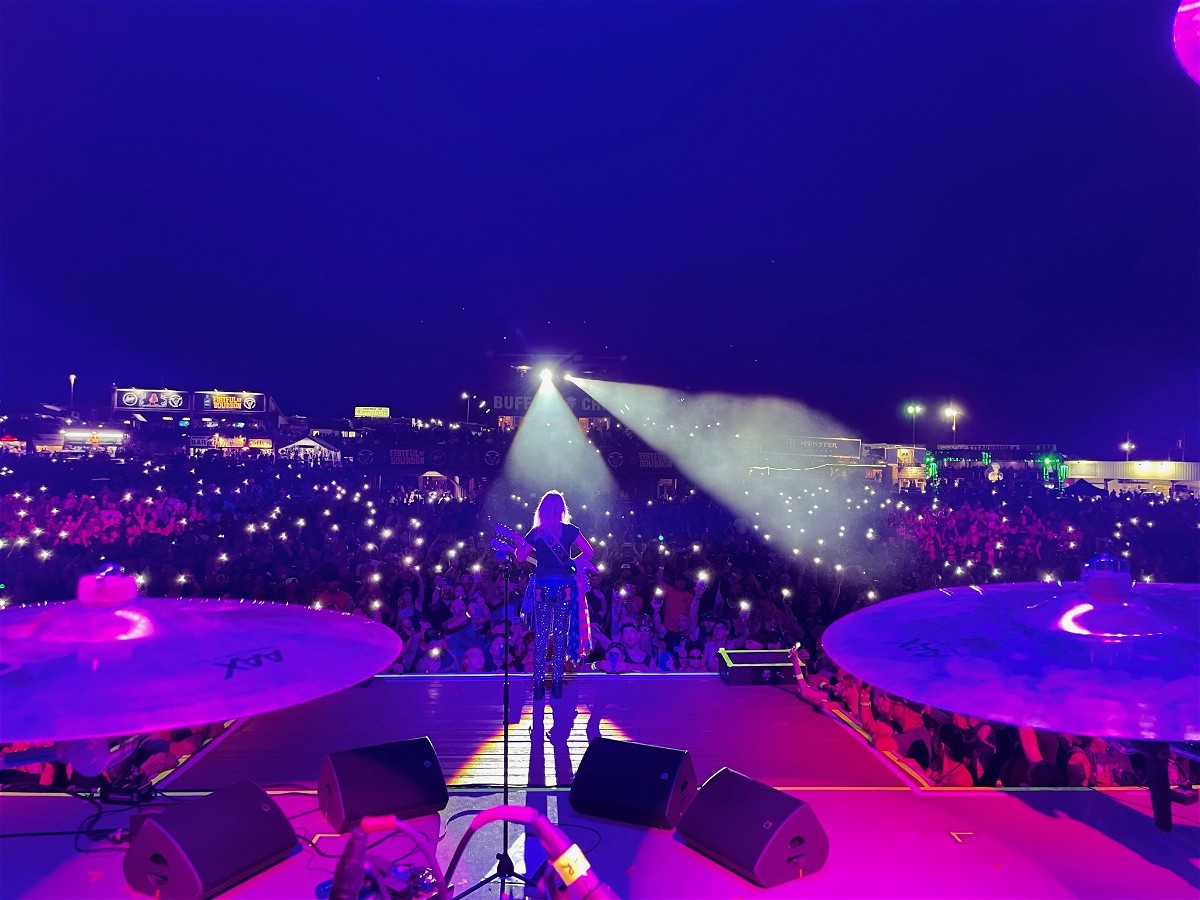