As promised last issue, I wanted to offer a few more details on last week’s Rock Legends Cruise with Lita Ford… mainly in pictures. I also have another tidbit to hurl your way that I hope you’ll find useful. Let’s dive right in!

Track It!
Visions and Digits. You have a vision for something you would like to improve on. Maybe it's getting in better shape or being more consistent with cleaner nutrition. Maybe it's the desire to practice more on an existing skill or start developing a new one. Or maybe you want to write your first book. In any of these cases, the vision will need some steady digits if it is ever to manifest in reality. And by digits, I mean the pure accumulation of numbers as they document your efforts: MIles ran, steps taken, words written, hours logged.
As the old saying goes, the numbers don’t lie. This is why it’s critical that we track our progress—by the numbers—with things that are important to us. Keeping a journal or log to tabulate practice time (for that performing art or athletic endeavor), nutritional intake (for those looking to clean up their dietary habits), sleep (quality and quantity…. something I've been drilling down into more lately), word counts (for writers) and, of course, exercise: my favorite thing to track. Been doing it for years, and these kick-ass new technologies make it easier than ever.
As one example from the standard Health app on the iPhone: Here’s kind of a fun one from last week on the cruise (via my iWatch tracker): 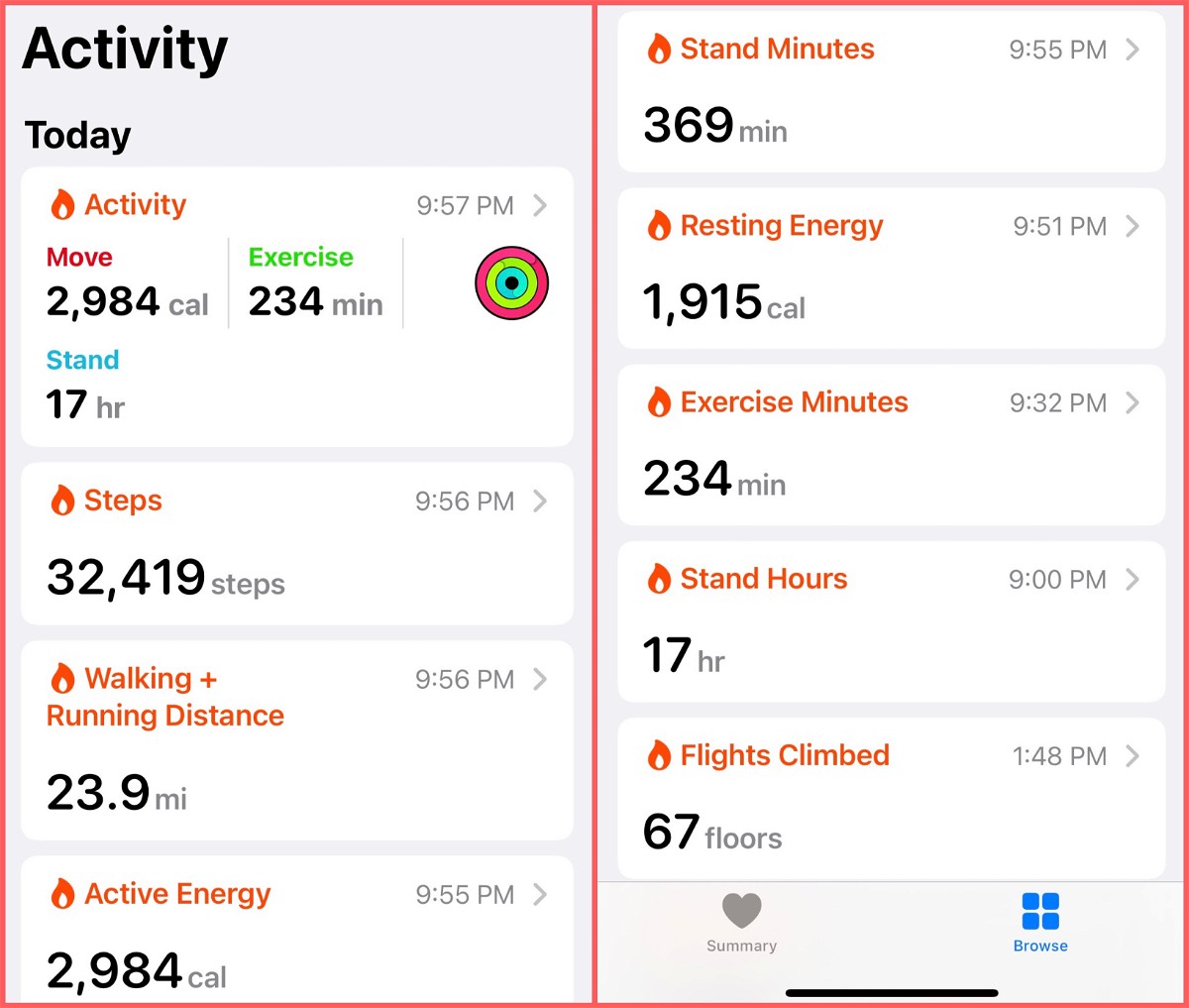 There was obviously plenty of activity that day, including the exertion of a full show in the evening. And while I did do a lengthy run in the AM and traversed the ship quite a bit throughout the day (generally using the stairs), a good chunk of my total “walking/running” miles were recorded during the show. The app still thinks I’m sprinting when I'm drumming! Crazy shit... but also a testament to the kind of energy I typically expend during a show and, therefore, a personal reminder as to why I have to stay in top condition year-round. (This is my job!) 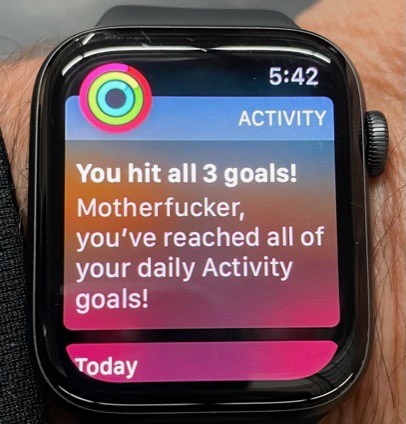 Always nice to get those personal motivational messages from my iWatch!

Weekly Tracking, as Opposed to Daily
I’ve always preferred to keep weekly, rather than daily, tracking goals. Number of workouts or runs, total hours of practice, total number of words written, etc. Even steps-per-day can become a weekly goal. The main reason is because, as we know, life happens, and we will fall short on our daily “numbers” goals from time to time. But rather than write this off as a failure of sorts, we can simply dig down a bit deeper the next day or two and make up for the day that wasn’t so great. Next thing you know, you’re "back on track" with your daily average goal as you hit your weekly quota.
By the way, I first stumbled upon this approach as a student at the Berklee College of Music in Boston. Upon seeing a fellow drummer, Dave Wood, track his practice time on a Casio watch, I immediately jumped out and bought one, then went about trying to stockpile six hours of practice per day, meticulously logged on the watch, a minute at a time. I soon learned that what I had previously considered a six-hour practice day was probably, at best, closer to five, once you factor in the breaks and interruptions. I also learned that, on particularly busy days with classes, homework, writing arrangements, playing with various ensembles, etc., six full hours just wasn't going to happen. BUT, if I set a goal of 40 hours per week, no problem. If I had a measly four-hour practice day, I could make up for it with an eight-hour practice day soon thereafter and still hit the weekly quota... as opposed to "failing" on the four-hour day. Likewise, I've employed a similar protocol through the years with various stints of practice, writing (weekly word counts), and mileage (running).
How to Log It
One final point to mention is the how and where of your logging the time. For exercise, there are tons of options where apps tie into watches like the iWatch, Fitbit, or Garmin. You can also train with your smartphone handy and log directly into an app. It's all so easy these days. For keeping track of hours, there are several cool timer apps out there where you can set up your weekly goal time, then hit the app and commence with the countdown at every practice/training session.
I like the Just Timers app, since it can be activated from my watch or phone. Here's a recent example of a towards-the end-of-the-week read-out of a few things I've been tracking. 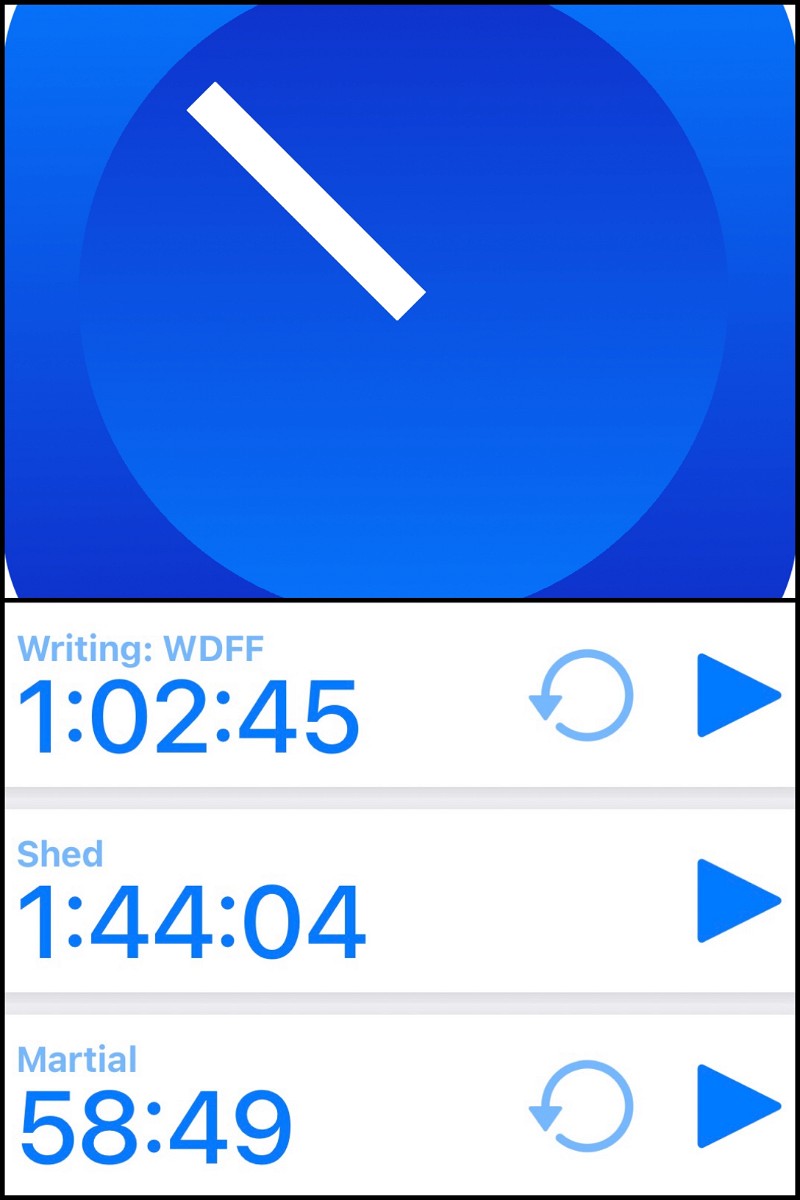 From the top line down: a new book I'm working on (where I still track words, but I also like to track time); drumming practice (shed), which can include practice pad for when I travel; and 30 mins a day of martial arts-related training, which includes a lot of range-of-motion and flexibility work. (Running mileage is tracked separately, of course.) BTW, total hours for writing and practice are determined at the top of each week, based on what all else is going on (travel, other projects, etc.).
Part two of this process involves the actual logging or archiving of the numbers you track on your devices. For this, virtually any decent calendar or note-taking app (like Evernote, for example) can be your go-to for "keeping track of the tracking." I've always used a basic journaling approach and just documented what the final tallies were each day so I could keep tabs on the weekly count.
And finally, for straightforward weekly tabulations (4 twenty-minute walks around the hood, or 5 social posts per week, as an example), you can simply mark those in a basic calendar or journal and gauge your progress as the week unfolds.
Of course, these are just a few ideas. My way might seem too "left-brain" or over-the-top for some. But I love that shit! Find the magical combo that works for you... and start with just ONE thing to track so you can establish a groove.
What’s something you could start tracking that would most significantly affect your life?
_______________

"Behind the scenes" shot from show #3: 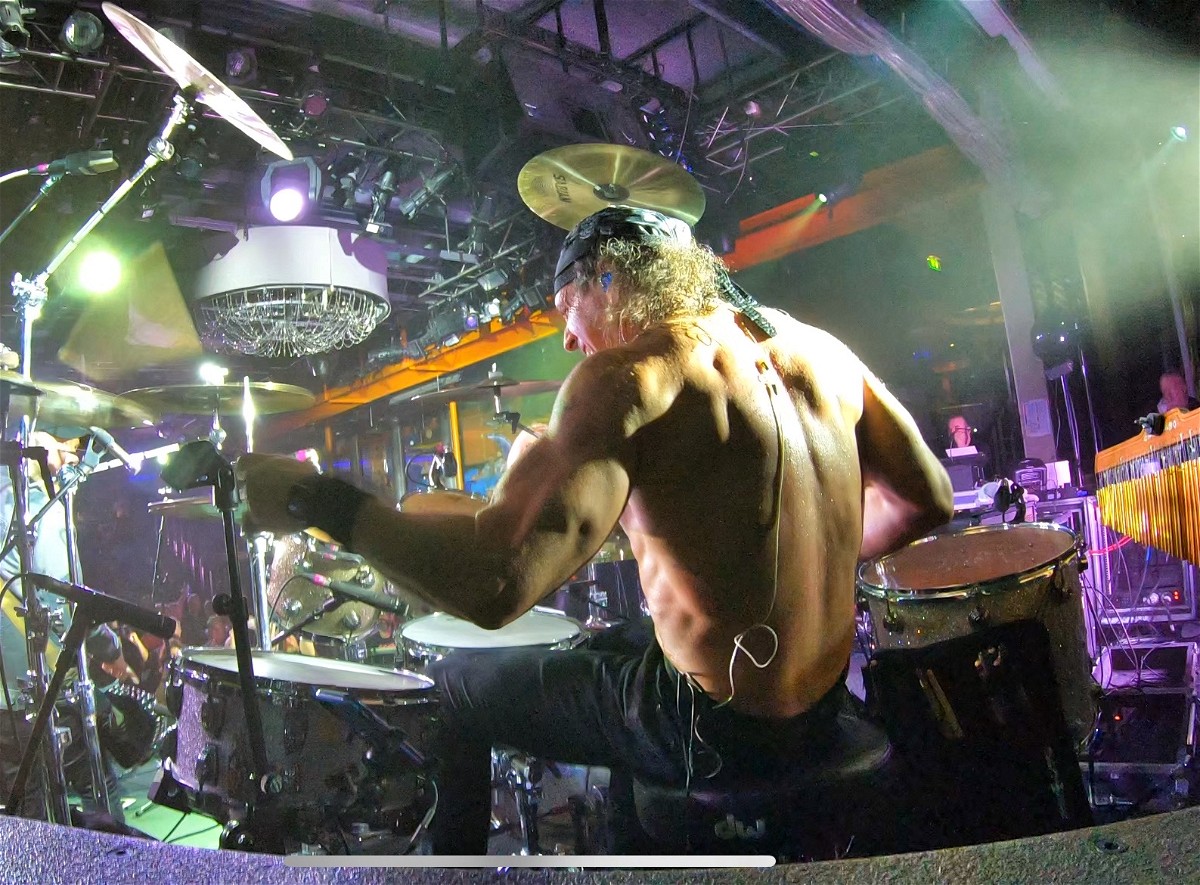 + + + + + + +
Here’s an upper-deck running track shot I pilfered from our bassist, Marty O’Brien’s personal collection. He always captures the most extraordinary snaps: 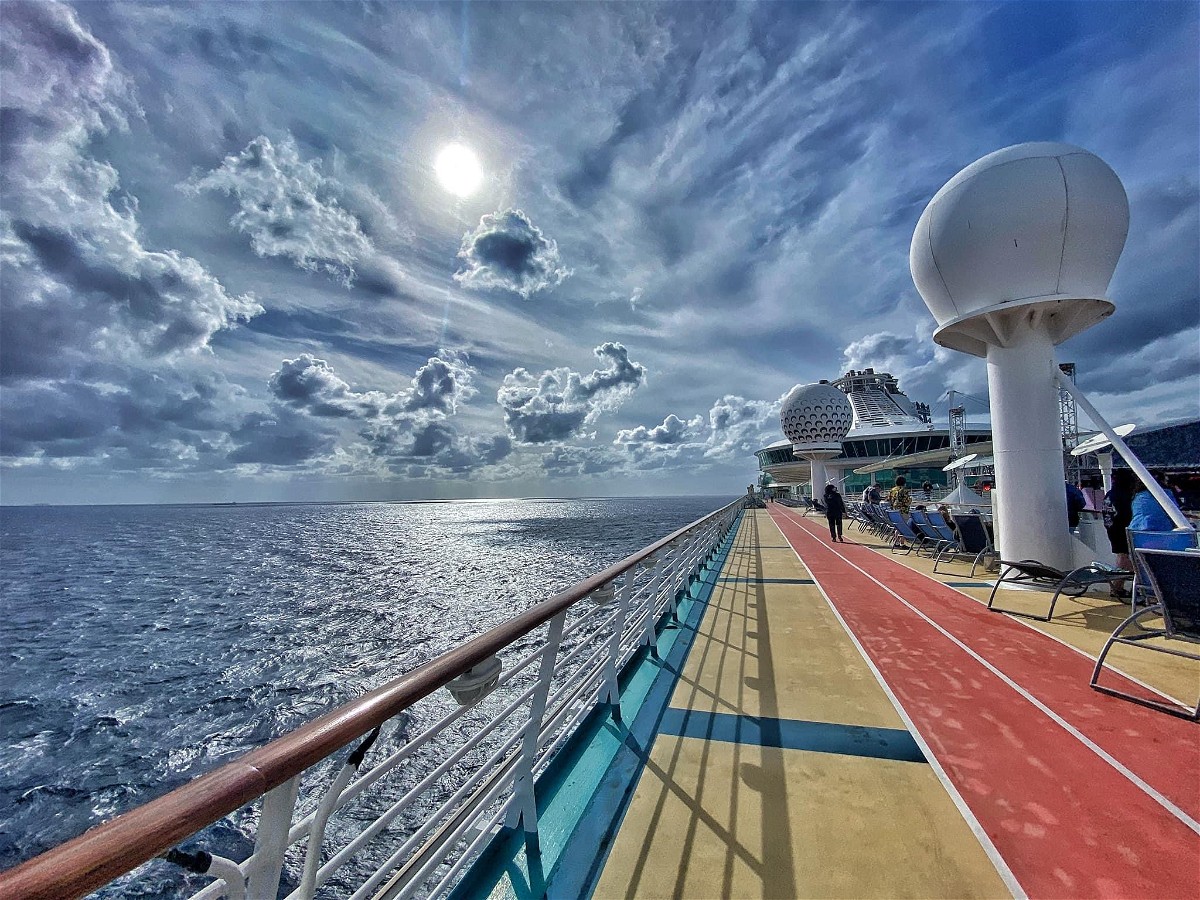 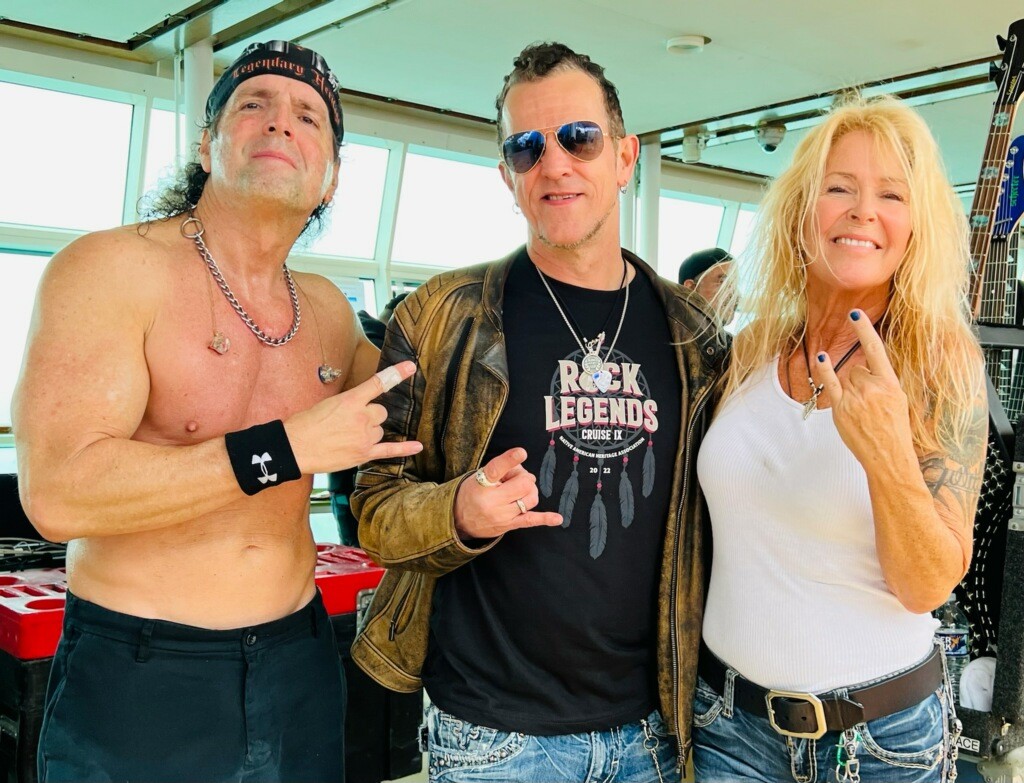 + + + + + + +
The next night, Hoey was apparently walking behind the stage during our set, looked up, saw this, and captured it on the ol' iPhone: 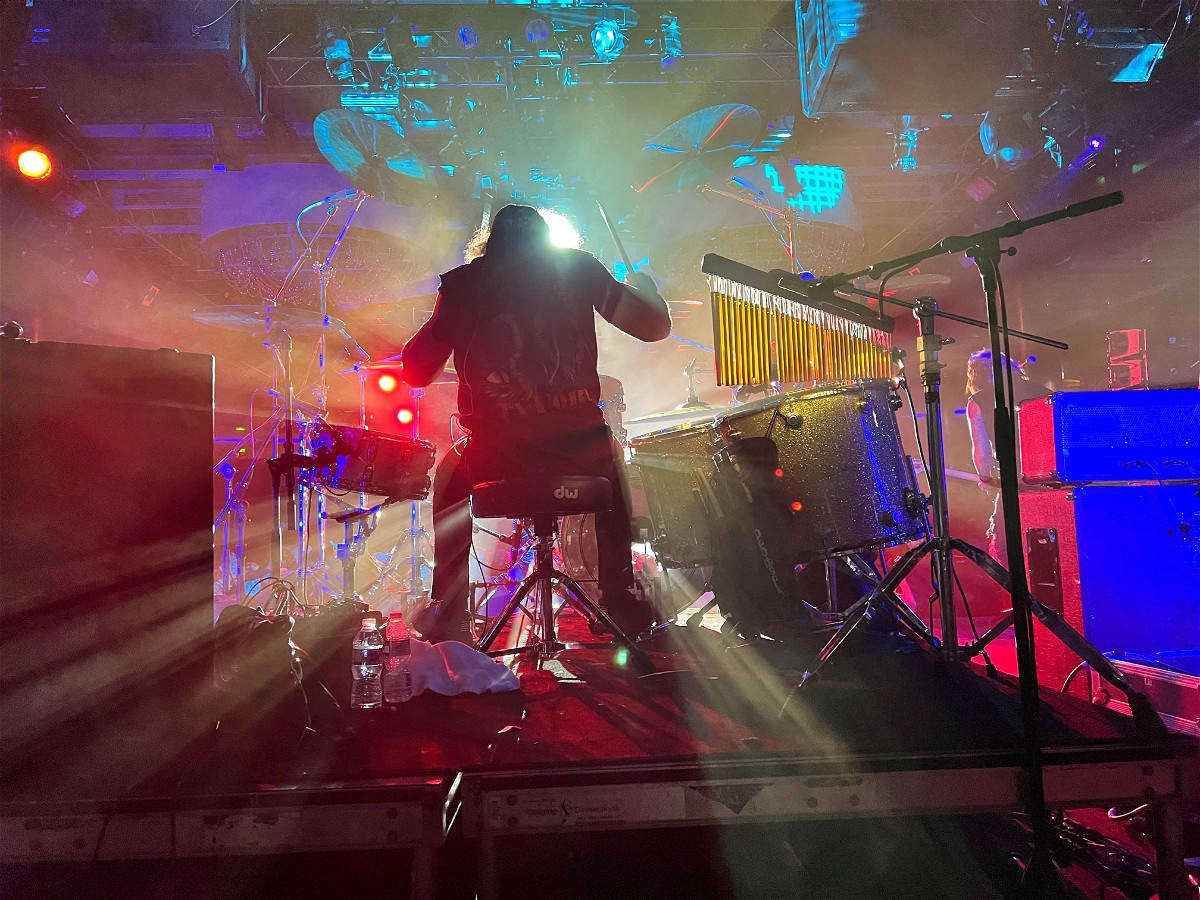 + + + + + + +
Last time, I described the rock cruise experience as "its own floating-bubble eco-system," and the fact that this often includes multiple big-ass venues only drives the point home. Here's the Royal Theater post soundcheck, stage-view: 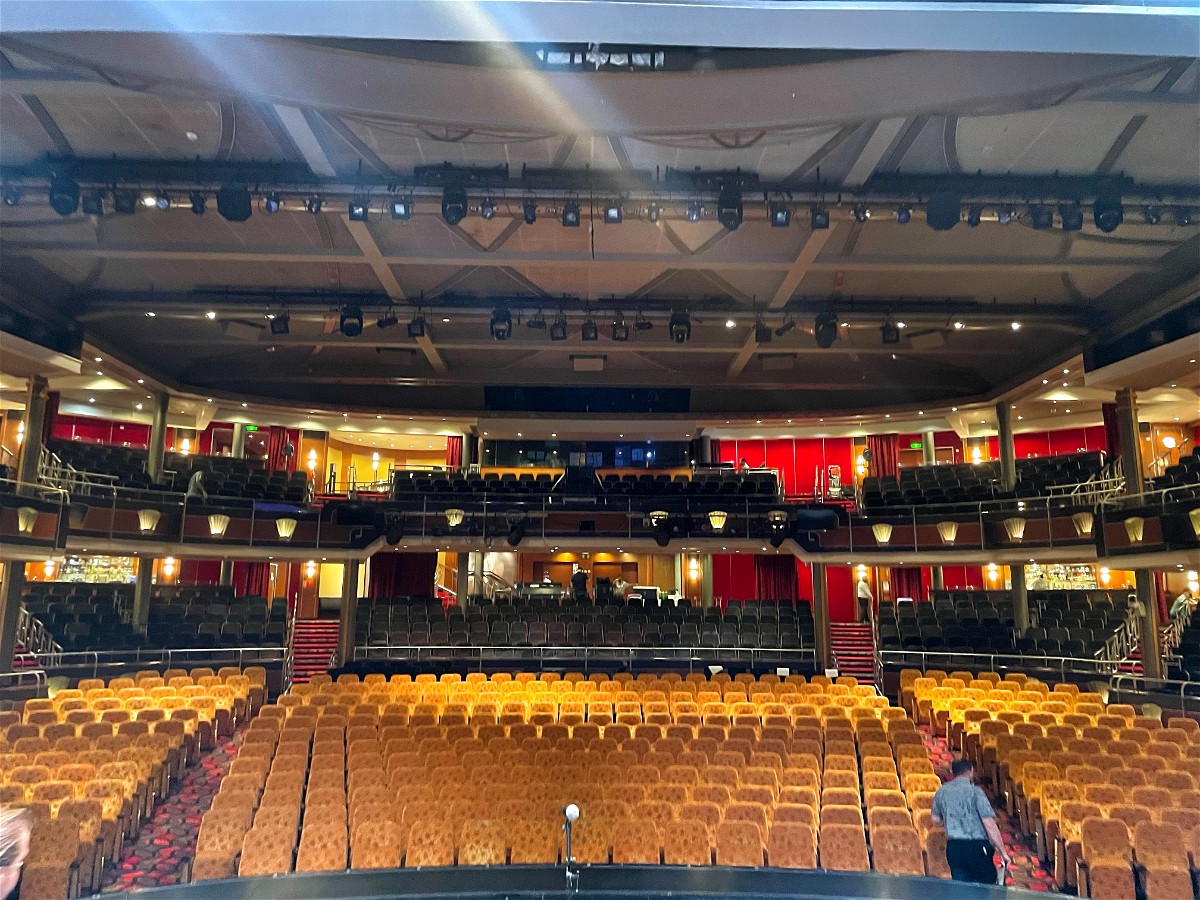 + + + + + + +
I’m actually not much of a concert-goer… at all. But on occasion, I’ll drop in for a quick listen if it’s someone I really want to hear, and we’re sharing a bill. Such was gonna be the case for the mighty Deep Purple on this cruise. Given their tremendous influence on me early on—particularly drummer Ian Paice— I was looking forward to scoping out a few tunes. On our first night at sea, I was finishing up a workout as their set started, so I dropped into the hit late and only managed to catch “Space Truckin'” and “Smoke on the Water.” It was an emotional experience, if I’m being honest… seeing those guys—three from the classic Made in Japan era—on stage, doing their thing. The memories came flooding back. 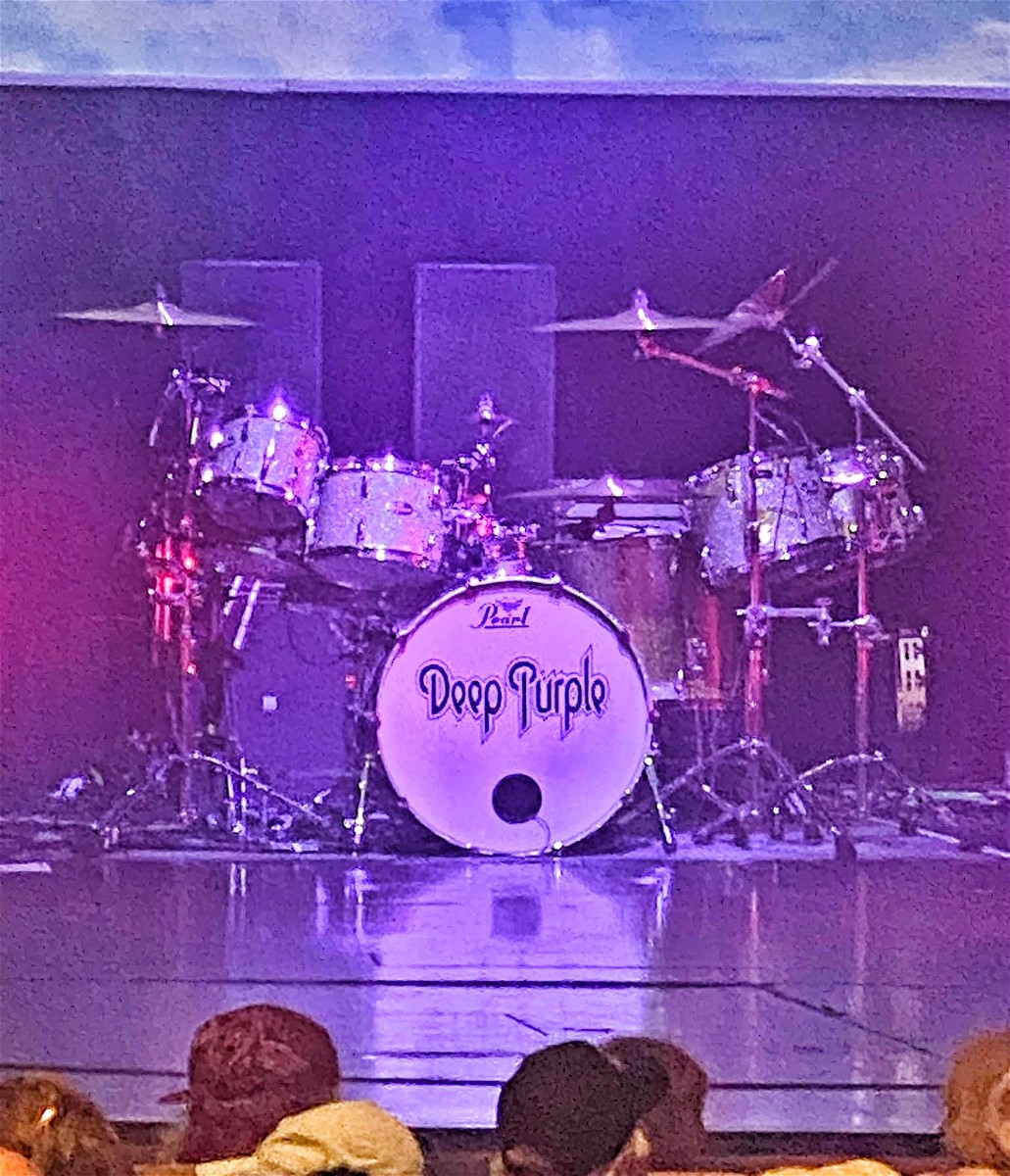 Another Marty O'Brien shot, moments before showtime. You can see how close he was to the stage, plus HE caught the whole set!
I looked forward to dropping in on one of their other two shows and maybe catching “Highway Star” and a few more. But… it wasn’t meant to be. They only wound up playing that one show because three of the guys tested positive for COVID on the ship!  So, no more shows. I fucked up! 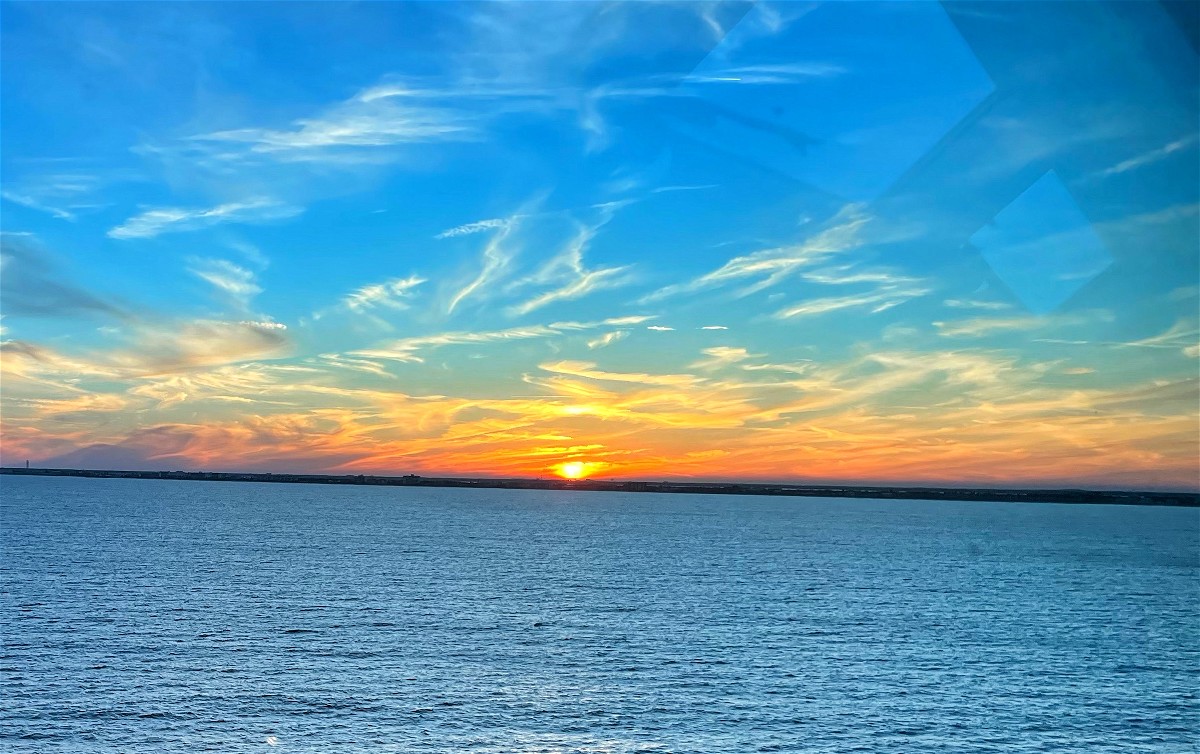 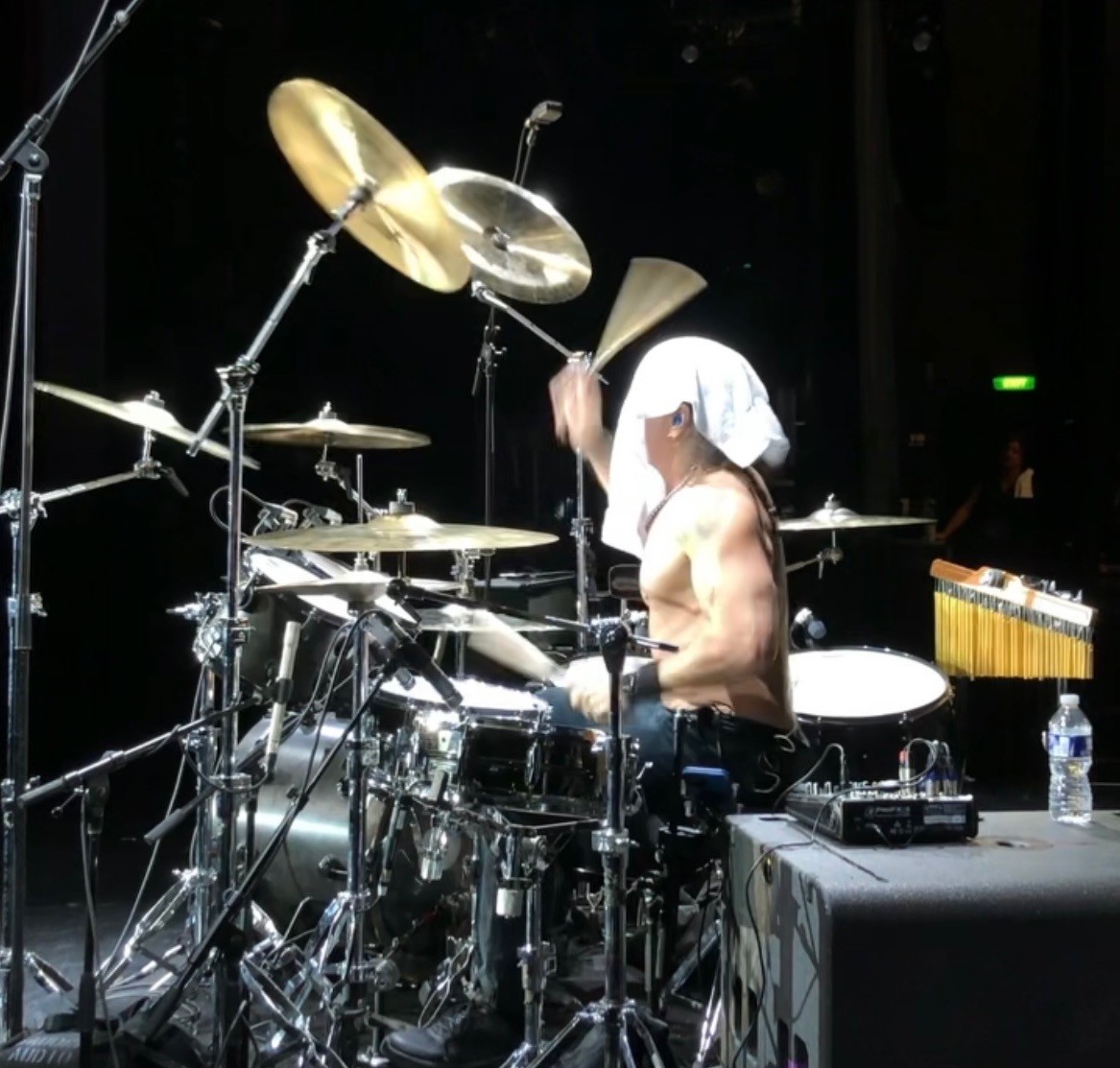 This week's vault vid was captured by my drum tech, Jesse, in a playful moment during the drum solo on the first show of the cruise. Occasionally, I'll cover my face with a towel when soloing, then proceed to challenge my muscle memory/hand-eye coordination as I essentially solo blindfolded. Just having a little fun, of course, and I had no intention of posting it anywhere. But in the spirit of my "post it all" mentality as of late, we went ahead and threw it out there on social last week, and I understand it has become one of my most-watched vids ever. Go figure...

_______________
For Your Quick Reference:
My main website at www.bobbyrock.com is constantly updated with cool new stuff. Be sure and take a moment to sign up in the upper right-hand corner of any page on the site. It only takes a minute. This will give you a much more customized experience, and also grant you access to various members-only areas, events, etc.
Tour Dates: If you are signed up to the site, you will receive an automatic email notification any time I'm playing within 150 miles of your crib.
Newsletter Archives: Scope all the back issues here. There is even a Table of Contents reference so you grab an "at-a-glance" view of what's in each issue.
News Feed: Stay in touch! Think of this as Facebook and Instagram rolled into one location, plus extra posts exclusive to the site.
The Bobby Rock Store: Books, Music, BR drumsticks (stage-played and brand new), T-shirts, Signed 8x10s, Dragon Dirt and more...
Dragon Dirt: My brand new custom superfood powder. Scope the site for tons of info!