Here's a basic thematic pattern where we “drype” (drumming + typing) some words of the legendary Sufi poet, Rumi. This simple two-bar phrase is part of a larger solo piece I’ve been working on, but I think it’s fascinating how Rumi's words transpose into drumming that sounds so… well… poetic! 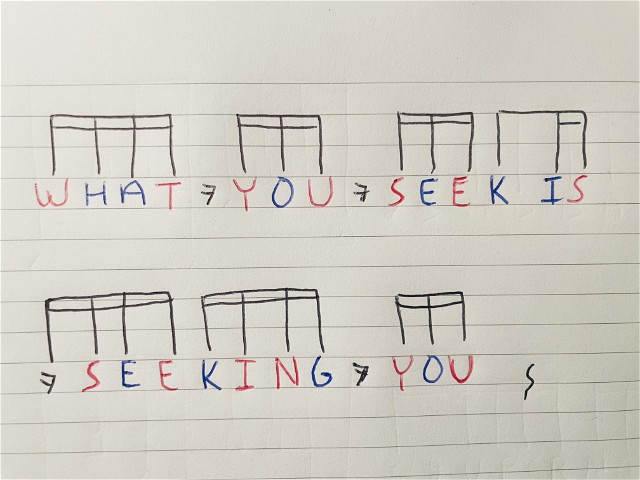 2
Opening statements from the drum solo at the Surf Ballroom in Clear Lake, IA, with Lita Ford: 1-21-22.

3
...and a little something from a Latin-influenced section from the same solo:

Here's yet another practice room vid that was never intended for public consumption. Working on some longer form phrasing ideas, creating different rhythmic/melodic combinations around the alphabet side of the kit. In these instances, I'm not thinking about spelling... only thinking about the unique collection of sound sources in front of me!

5
This practice room vid is part of a series I recorded late one night focusing on the “timbale side” of kit. Was trying to work on some improvisational skills within the confines of using just that part of the kit. Still not crazy about posting vids with all the mistakes, but such is the spirit of this new Drum Vid Vault endeavor I’ve been building at the site. Post it anyway!

6
Here’s a solo excerpt from a rowdy Lita Ford show, somewhere in Norway. European audiences are consistently great to play for… a perfect combo of exuberant and appreciative. That summer 2013 run through Norway and Sweden was no exception. Also, as per usual, Euro runs usually cover the gambit from huge festivals to mid-sized clubs. Both are cool in their own way, but this clip was from the latter.  Enjoy...

7
Here's another from that same run, this one, I believe, from a club in Sweden:

8
Working on a little hand-eye coordination during the drum solo at the Royal Theater… minus the eyes! Just having a little fun. With Lita Ford on the Rock Legends Cruise…

From a solo drumming tour of China in 2019, at a smaller master class for 30 or 40 teachers and some advanced students: Here’s a multi-foot pedal demonstration I did, where my feet are playing four different rhythms—on four different sound sources simultaneously—while my hands do some basic improvisation. Again, this class was mainly for more advanced players, and yet, I got the impression that they hadn’t seen much of this kind of thing before. As you’ll see, I attempted to explain everything through an interpreter. Note: right foot plays two different rhythms on the bass drum and distortion hats; left foot plays two different rhythms on the main hi-hat and cowbell pedal (with the cowbell part doing a lightly randomized “&2&” / “&4&” rhythm; hands do some basic solo stuff around the kit.

Pics from the masterclass: 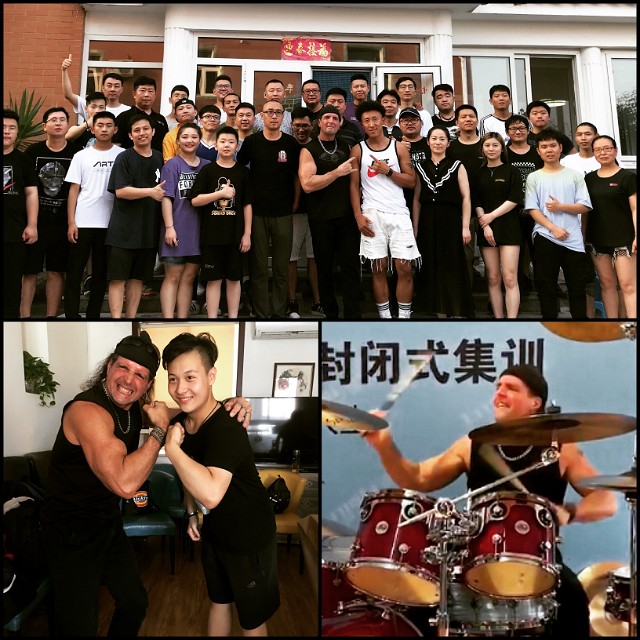 On Dr. King’s birthday in 2020, I was doodling around in the practice room on my “Alpha” kit and started spelling out—in rhythm—the tail end of his infamous "I Have a Dream” speech. A year later, I finally posted it. Here it is.

Here are my original notes, scribbled on the back of some random index card: 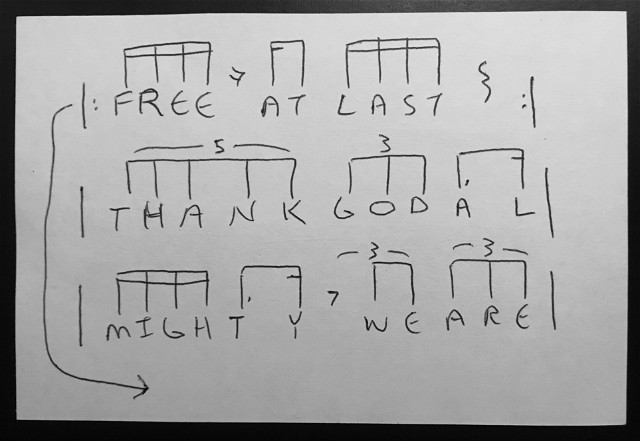 A quick snippet from the practice room. These kinds of vids were never meant to see the light of day... just logging riffs and exercises for my own personal archives. But some of these sound pretty cool, I think. Love all of those voices on the big kit...

My extensive collection of drum-based video clips are not restricted only to practice sessions and shows. I will occasionally capture a moment here or there just for the sake of documentation. Such was the case during a recent head-changing of my Alpha kit. I recorded at least two different vids that offered a “behind the scenes” reflection on my fascination with the inside of a drum…. the guts of it, if you will, and the various aromatic hues they can have of either chemically, woodsy, musty, or some combo thereof. The textures and visuals are another aspect of savoring instruments that I’m so used to hearing, but not so immediately “in touch” with the inside of the shells where the sound actually originates.
Yes, as mentioned in both of these clips, I’m pretty sure these vids would clearly be most of interest (if at all!) to drummers… period. But in the interest of full disclosure to all aspects of the instrument that fascinate me, here ya go...
My 40-piece Alpha Kit is based around a Radial Bridge kit that Steven Volpp built for me back in the 90s during the Peavey drum days. This vid was originally texted to him during a recent head-change:

And here, a 60s-era Rogers kick drum from my Alpha kit gets the "treatment"….

Shot some footage while playing an impromptu triplet-based, hi-hat/double-pedal ostinato during the drum solo. Spirited crowd at J.D.Legends near Dayton!

I don't recall the venue here, but it"s always an interesting effect when the audience can see two distinct vantage points of a solo happening, simultaneously.

Here's another behind-the-scenes glimpse of a Lita Ford soundcheck, playing “Close My Eyes Forever”… and digging in! (Digging in so hard, in fact, that my tech Jesse's iPhone was distorting to such an extent that it sounds like extra bass drums are being played!) Oh well… you’ll get the vibe. (From The Family Arena near St. Louis, 9-30-22)