We are currently reorganizing the Vault, but feel free to take a look around. Still a lot to scope...

As the old Chinese proverb goes, "A journey of a thousand miles begins with a single step." In this section of the site—Drum Vid Vault—I will endeavor to post a shit-ton of my personal collection of practice room vids, along with a reasonable archive of live drumming vids and... well... anything else along these lines.

On this first page of the Vault, let's begin with some of the earliest stuff I could find on my primary solo/practice set, the "Alpha Kit" (at least in a format that is currently playable!), and then move forward up to some more recent clips, while offering some insight into the evolution of this 40-piece monstrosity. From there, we'll get into a mixed bag of different things, from different gigs and different eras.  This is just Page 1 of what I'm hoping to be close to 20 in all... but this one will have 19 vids total (as opposed to our usual 10 per page), so I'm looking to cover a good cross-section of stuff. Enjoy!

Oddly, this is perhaps the oldest vid I could find on the Alpha Kit. I did a series of 3 or 4 takes of me playing just the "timbale" side of the kit on the original configuration before the 360-degree version. I was fucking around one night and happened to film it. I posted one or two of these on YouTube with not much thought... but would never wind up posting another playing vid from the big kit for nearly a decade! Again... no idea why. 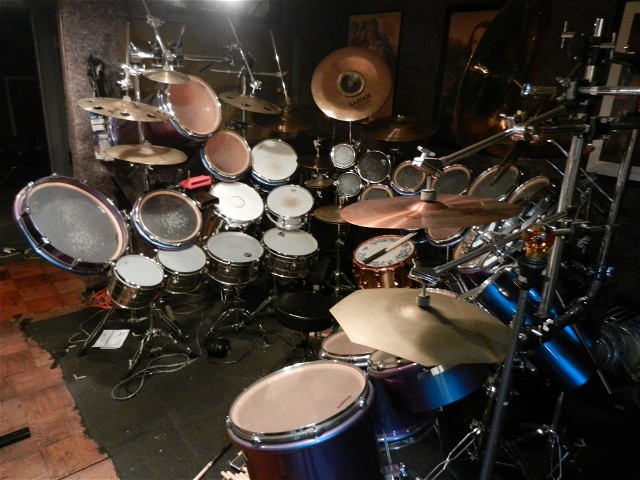 Next, here's a jamming-around excerpt from a larger clip (circa fall 2012) recorded right after adding a front portion to the kit to make it a 360 design:

In terms of the Alpha Kit's evolution, why add the front half? Two reasons:

1) At the time, I figured if I ever played live with the kit, I wouldn't want my back to the audience the whole show, and:

Here's a pic of the original 360 design as you see in the first vid above: 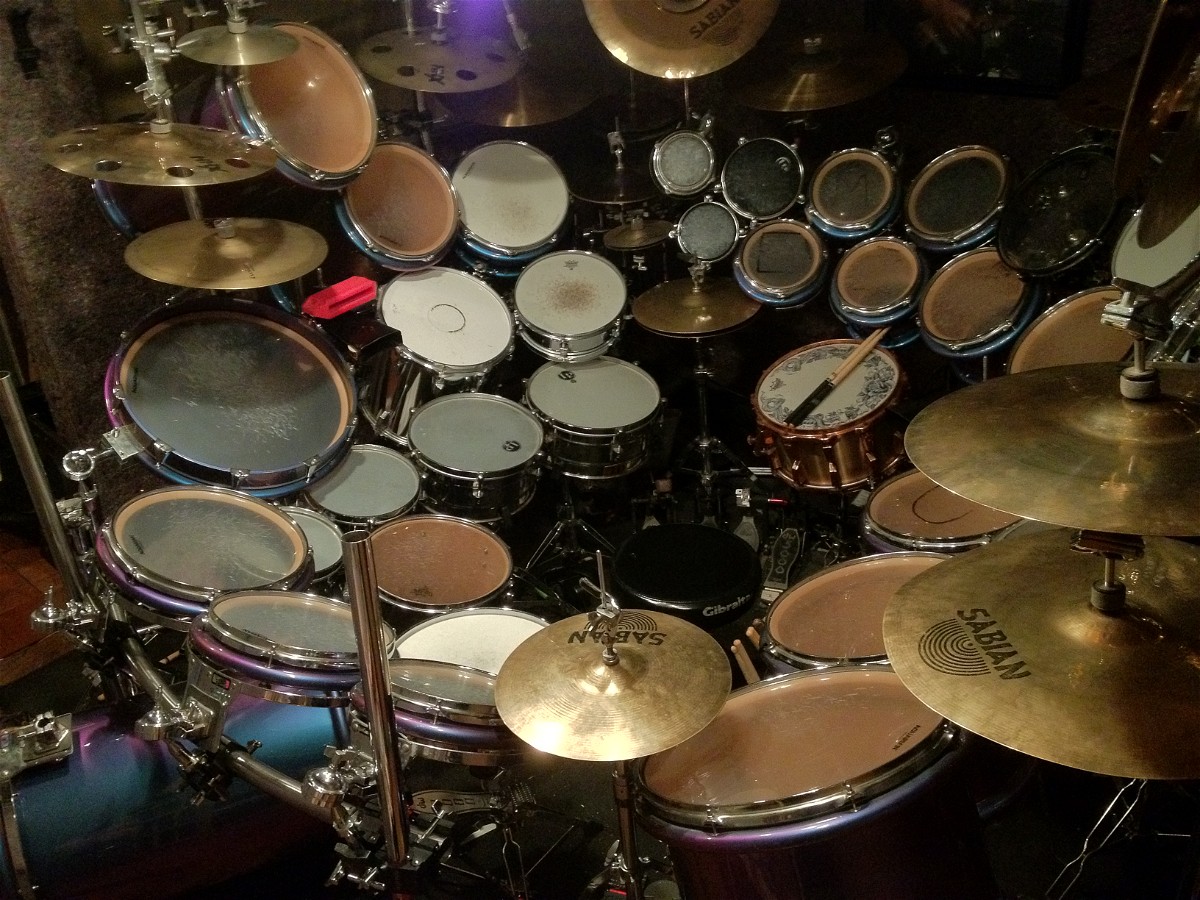 Here's a quick video tour of this original 360 set-up:

Here's the most recent version of the Alpha Kit. Been this way for years now. Note that it includes several tweaks to the actual set-up, in terms of what drums went where: 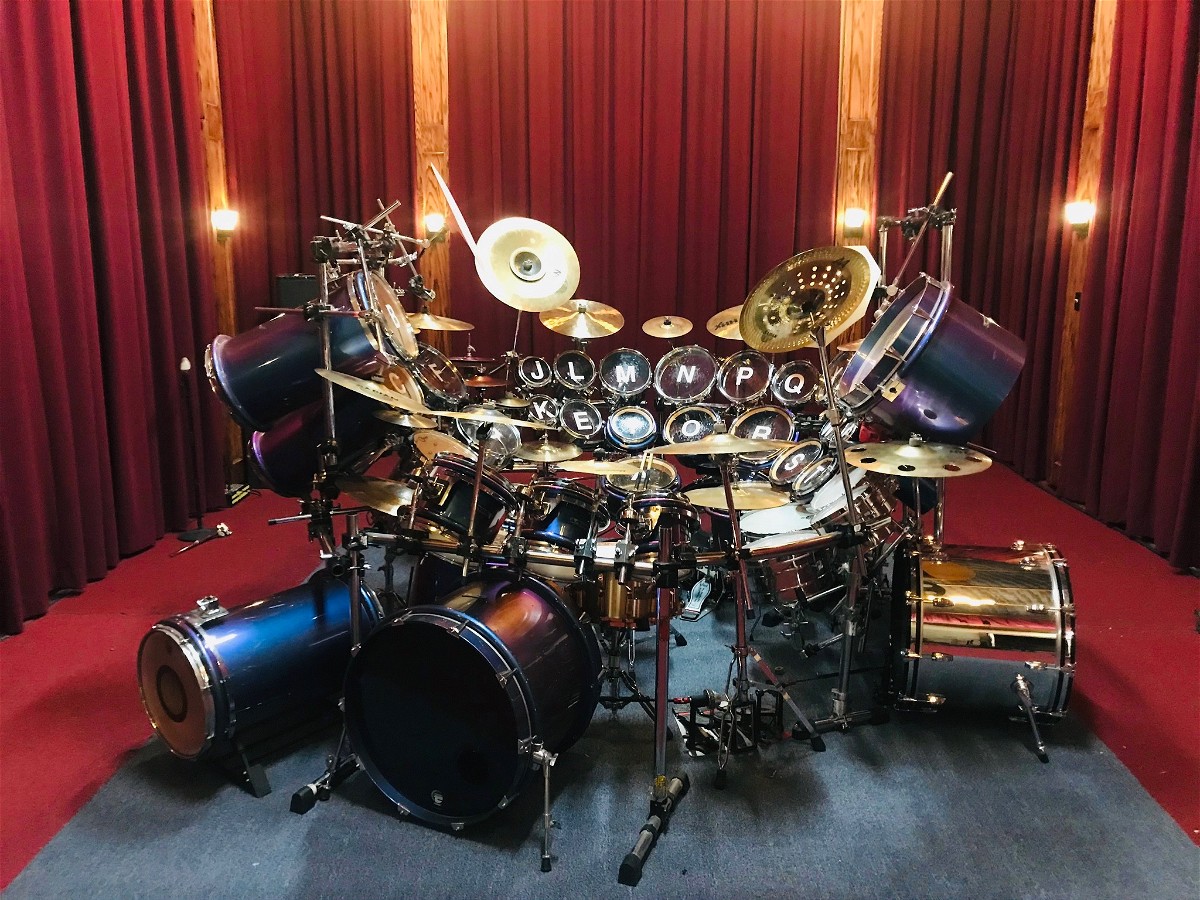 About the Drums
Meet the Alpha Kit. This beautiful monstrosity has been my primary practice room/solo project drum set for more years than I can recall. A big chunk of the kit is my original Radial Bridge drum set that Steven Volpp and the Peavey gang built for me back in ’99. I started with those drums, then once I began to develop the Alphabet Drumming™ concept—where I play certain words and phrases in rhythm—the set began to expand into its present 360-degree design. I can face forward or backward as it's essentially two giant kits melded together.
Because I’m more of an accumulator than a collector, I had amassed a wide variety of drums and cymbals in storage near my practice room. And as my vision for this kit expanded through the years, each new piece was brought in as somewhat of a functional placeholder for what would surely, one day, be some mammoth new custom-built drum kit, sparkly and pristine, with its perfect maple shells and glistening brass and chrome. After all, this was just the 1.0 Frankenstein version of the Alpha Kit, right?
But then, somewhere along the way, after countless hours of playing this kit and listening to its glorious tones reverberate around the woodshed, something unexpected happened: the “Frankenstein" nature of the kit became its own unique thing—its own twisted choir of percussion voices—and it simply sounded like no other set of drums I’ve ever heard. In other words, the unorthodox configurations and unconventional drum and cymbal groupings created their own original, collective sound. And I knew that, at least for the foreseeable future, this would be my primary solo kit… just as it is: all 40 drums, 30 cymbals, and 10 foot pedals of it.

At first, I was just going to memorize which letter went with each drum. But not only was this impossibly arduous, but it also took away any prayer of contextualizing what I was playing for a viewer! So, as of Feb 2014, I started adding alphabet decals on the underside of each head. Also, the split-second eye-hand connection of being able to read each letter proved to be critical in playing certain alphabet drumming phrases with any degree of speed.

By the way, I ultimately chose to lay out the letters in a simple 1/2 and 1/2 kind of format: The first half of the alphabet is basically laid-out in order from A to M on the left hemisphere of the kit, and N to Z on the right hemisphere of the kit. Truth is., no matter how you lay things out, certain words and phrases will always be problematic to "spell!"

Here's a recent walk-around tour of the kit for comparison:

Which leads us to a clip of some actual "Alphabet Drumming" on this current set-up:

Alphabet Drumming™ has been my magnificent obsession for a number of years now. It’s my way of combining drumming and writing, where I spell out various words or phrases in rhythm, creating a unique language of sounds. The process of Alphabet Drumming usually works like this: I’ll start jammin’ around with words, phrases, poetry, prose, or lyrics and then, hopefully, make something musical out of it.

Here’s a super simple example: Spelling out the word “DRUMMING” in a groove.

This groove is for my version of Black Sabbath’s “Supernaut,” which is set to appear on my next solo record: a Soundtrack for my book, The Boy Is Gonna Rock. And since it will be "an adventurous instrumental tribute to songs that inspired the story," what better way to make the tune’s infamous percussive middle section more “adventurous” than by playing an Alphabet Drumming™ groove that utilizes two relevant words: “Sabbath” and “Supernaut.”
Actually, this groove is indicative of how I usually stumble into new ideas on the alpha kit. In this case, I was jamming around with a Latin-linear funk-rock-type beat with the cowbell, thinking about the song… and the band… and I thought, Wow… Sabbath… Supernaut…. cool… hey, wait a minute. S-A-B-B-A-T-H. I played it. It sounded interesting. Then I incorporated it into the groove.  Same with S-U-P-E-R-N-A-U-T. Took a little wedging at first, but then, the two words brought in an interesting call-and-response kind of feel. It sounded very musical to me, so I kept it.
You might notice that this example is a bit under-tempo, but you'll get the idea:

Here is the original notation: 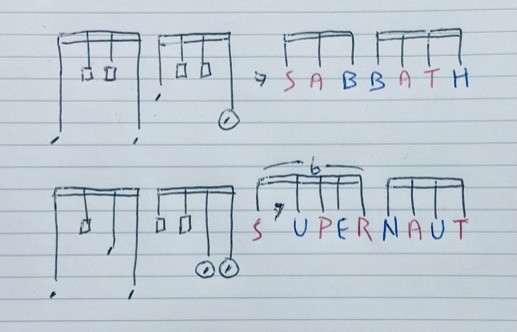 PS. The circled noteheads are viewed as additional sound sources, as opposed to additional letters: in this case, a "timbale" and a floor tom.

And from the other side of the kit, here's a little multi-voice improvisation where we keep a very basic kick/snare groove chugging along, while we integrate multi hats and cowbells.

Here's a typical practice vid from the archives, rim clicks and all. These vids were obviously recorded for my own reference (so I could recall these various ideas later), but I've decided to share some of these here and in my Drum Vid Vault, just to offer a bit of insight into my process. I refer to this particular thing as "sweeps"... which are, in my mind, a drummer's version of those dense clusters of notes you hear on guitar or saxophone that sound cool when played really fast.  To me, they have more of a wall-of-sound "color" kind of vibe, which is nice to have in the toolbox for special solo riff or drum fill occasions.  Here's where it helps to have a shit-load of sound sources!

Switching gears a bit.... here’s a drum solo excerpt from a Lita Ford show with my own custom DW kit…. featuring a multi-voice, double-bass/double hi-hat pattern along with “the incredible tilting chain rack.” We often have to use gear that’s provided for us at each show, due to the logistics of our travel schedule. But when we’re near LA, or out on a bus tour run, it’s always great to play my own kit!

And here's a walk-around tour of the kit with the addition (naturally), of a few more pieces::

Here's a different angle of “the incredible tilting chain rack," from the audience's perspective.

And here are a couple of still shots of this kit, as it remains today: While soloing is often about notes, notes, and more notes, playing with a band is ultimately about space, space, and more space. A drummer’s “sound”—and, in fact, the overall feel of the music—is largely governed by the space you maintain between the notes. I always try to let that shit breathe when I'm looking to pound out a heavy groove. (“Relentless” with Lita Ford, from a recent hit in Santa Fe.)

As we dig back into the archives for more live stuff, there are a shit-ton from various Lita Ford shows—with some of the earlier ones on a super scaled-down kit... like this one from a solo spot in Sydney. This is from an Australia run with Lita Ford a few years back. Hope to return there soon…

Here are three short excerpts from a show in Zhengzhou during my 2019 Solo Drumming Tour of China. This date was in a smaller hall than normal, but the place was packed out… and the show turned out to be a sentimental favorite in a way, just based on the energy in the room, and the unwavering presence of the audience. What a vibe. So many great memories from that run…

Part One: Yeah... I suppose the Buddy Rich influence will always turn up from time to time....

Part Three: Standard end-of-solo shred... but we'll spare you the headbanging part at the end for now!

Yet another clip from the “private practice room” archives, and something never meant to see the light of day. Working on a little improv that features a lot of double-stroke combinations, utilizing the full range of sound sources in the Alphabet kit. In this context, I’m not trying to spell anything… just looking to create interesting rhythmic and melodic phrases with this unique combination of drums! (Notice in the opening bars, I’m jamming around with the “Supernaut” groove where I AM trying to spell something. Refer to Page 1 ex. #6 for more on this groove.)